Almost three decades ago I began to study Physics and Philosophy in an ardent quest for understanding the world. I was driven by the hope there must be an enormous amount of well organised wisdom somewhere out there which, if thoroughly acquired, will provide a proper insight into what and how things are. Everything. 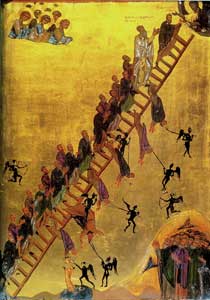 The Ladder of Divine Ascent (by John Climacus, himself climbing ahead)

In a graduate course on Philosophy of Language I met a Professor who explained to his puzzled audience that his teaching will be more like an intellectual garbage collection, his goal is that we leave the room with less than what we brought in. We studied Wittgenstein’s Tractatus and I remember I refused to accept Wittgenstein’s idea comparing his text with a ladder we should throw away after climbing up. I wanted to have something to take home, make use of what I understood, employ the new understanding as a kind of intellectual tool-box. The idea that it just brought me somewhere else, and after getting there, I can safely forget my vehicle seemed unacceptable. 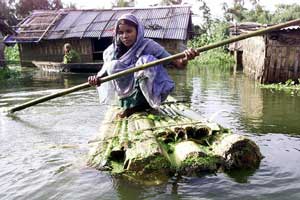 The Pali-Canon, the old text collection compiling what is believed to be Buddha’s words, contains a dialogue where the Buddha compares his teaching (the Dharma) to a raft. “Should I not lift this raft on my head or put it on my shoulders, and go where I like?” he asks, provoking the obvious answer: of course we should leave behind the raft “bound together by reeds, sticks, branches and foliage” (what a metaphor for the Dharma!) after we crossed the river and reached the other shore (Alagaddupama Sutta, MN22).

Once the teaching served it’s duty, we can safely leave it behind. Be it a ladder, a raft or the Dharma, no need to carry it with us …