As a young student of Aikido, I believed we should behave somehow strong and superior, a bit like the samurai in certain old Japanese b&w movies. When, at the end of my first year of practice, Kobayashi Hirokazu gave an Aikido seminar in my home town, I was much looking forward to meet some kind of martial arts super hero …

And there he came: yellow T-shirt, worn-out blue jogging pants and two plastic bags in each hand. He occupied the place on the bench next to mine in the changing room, and started putting on his dogi and hakama. 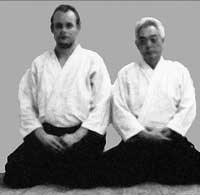 He? A super duper martial arts hero, looking like that? An Aikido master who studied over 25 years with Ueshiba Morihei, the founder of Aikido? In a yellow T-shirt? Undressing next to me in the students’ changing room? He must be a fraud!

But Kobayashi Sensei was a true master, I later found out (and I am very grateful for what I learned from him during all the years)!

Though, his behaviour was always so modest, so normal, so non-pretentious, you could easily mistaken him for just a friendly old man. Well, actually, that’s what he was: a friendly old man … and a true master of his art!

All the really good teachers I have later met in my life shared this attitude of true modesty, of friendliness and compassion. All of them were always very approachable for the young student … and so I kept as good as possible a certain safety distance to those teachers and senior students, who appeared too fierce and master-like already at a first glance.