Today I saw a unique exhibition of Japanese art. All items were produced by Japanese Americans while being imprisoned in internment camps during World War II. Contrasting the stunning beauty on display, the hardships of the artists and their families who lost all their possessions and eventually often their life was documented.

Creating art obviously is an inherent necessity of us human beings, next to finding food and shelter, and much more than just a luxurious pastime to beautify our saturated life. Or otherwise a method to produce objects for financial investment and speculation. I quote from the exhibition’s webpage:

The Art of Gaman […] is a universally uplifting story for its celebration of the nobility of the human spirit in adversity. Soon after the bombing of Pearl Harbor in December 1941, all ethnic Japanese on the West Coast […] were ordered to leave their homes and move to ten inland internment camps for the duration of the war. While in these bleak camps, the internees used scraps and found materials to make furniture and other objects to beautify their surroundings.

Gaman is a Japanese word meaning to bear the seemingly unbearable with dignity and patience. Arts and crafts became essential for simple creature comforts and emotional survival. 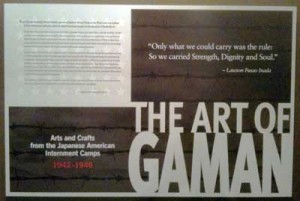 Through this exhibition I learned a lot about the social importance of art. It gave me a second view on what it means to live the life of an artist under all circumstances, and that it is possible to create the most beautiful art with just the material you have at your hands.