The other day an occasional visitor to my Dojo (1) told me he recently read somewhere in the depth or shallows of the world wide web that I might not have a proper authorisation to teach Zen, since my former teacher did not receive “Dharma Transmission” from his own teacher, Omori Sogen Roshi. This made me smile, I wonder who first proposed the nonsense equation so popular in Western Zen which reads:

Nevertheless, from this odd topic some very Zen-style dialogue developed. Our little conversation continued as follows:

“The only person who can authorise me to teach you is standing right in front of me!”

“Yes! Who is that person who can authorise me to teach you?”

“Show me that person standing in front of me! Now!“

Since we haven’t met recently, very likely he decided I better not become his authorised teacher …

So, what about my former teacher? 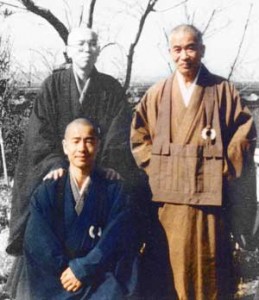 He had permission from his teacher, Omori Sogen Roshi, to teach Zen, and he did so for 4 1/2 years at Kanozan Zen Center (鹿野山禅研修所) in Chiba prefecture. This Zen Centre (like many others in Japan and abroad) is not a training hall for monks. It is a place for lay people who do not aspire a clerical career and ranks, though they sincerely study and practice Zen (quite opposite to most “professional” monks in Japan who are forced by their father to continue a family tradition).

After leaving Japan for good, my former teacher went to Germany with the blessing (and support) of his teacher to live a poor life as a Zen- and Hitsuzendo (Zen-calligraphy) teacher.

We met in 1998, and after almost 12 years of intense practise under his guidance he gave me his permission to teach Zen and Hitsuzendo. Two years later it was the time for us to part ways. 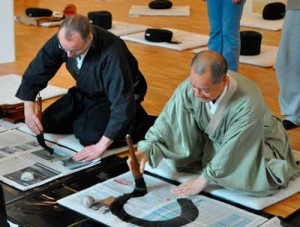 And his missing “Dharma Transmission”?

In my understanding, Dharma Transmission is an ongoing process which starts the day one seriously begins to practice.

Neither my former teacher nor I had any ambition to train professional monks, that is, to act as the shike (head teacher) of a sodo (training hall for monks). Why should I have any interest in what the formal requirements for such a position, as defined by some Japanese authority, might be? (3)

I don’t properly know the ceremonies and Sutra required to, say, conduct a funeral, a memorial service or a Buddhist wedding ceremony, which is a good portion of the regular duties of a Zen monk. I don’t conduct Dokusan (one-to-one Koan study), and I don’t pretend to hold or bestow any clerical ranks. This stuff has little to no overlap with my interest in a day-to-day Zen practise. Therefore I decided a few years ago to avoid any misunderstandings by giving the Way of Zen I practice and share with others a name of its own (4).

What I do in my Dojo and Seminars is sharing what I developed out of my teachers’ lessons, and I do not care at all if they had permission from their teachers or within their system to give me any permission to teach. What counts for me is the fact that the person I gave permission to teach me, I trusted and I decided to study with for a long time, at some point said: go ahead, you may now teach what you have learned from me!

Is that enough for you to trust me as your teacher? Of course not! No authority, no qualification and no sheet of paper can do the task for you to thoroughly examine if you can trust me and do not waste your time studying with me. Who knows if I ever will say to you go ahead, you may now teach what you learned from me. All I promise is: you won’t get any certificate, any rank or any title from me. It’s all up to you!
–

(1) I prefer to avoid the term “student” for guests who visit my Dojo from time to time to practise with me.

(3) A very detailed explanation concerning the regulations of the Soto sect is given by Muho (Part 1 and Part 2). For the formalities in Rinzai Zen a good description of the practice at Myoshinji can be found in: Jørn Borup,  Japanese Rinzai Zen Buddhism, Myōshinji, a living religion, Numen Book Series, Studies in the History of Religions (Volume 119), Leiden and Boston (2008), p.57 ff

(4) Nevertheless I keep friendly contacts to Japanese Rinzai Zen. Our Dojo is the official dependency of Shunko-In Zen Temple in Kyoto, since I very much appreciate the deputy head priest Taka Kawakami‘s open minded and modern approach towards Zen. Also I keep regular contact with Hozumi Roshi, the Zen Master who once ordained me and who is leading the Tekishinjuku outside Kameoka, the temple where I stay for some time whenever I come to Japan.