Every now and then I write about my Zen approach towards photography, for which I coined the term Shazendo (写禅道). As I outlined in previous posts, I believe photography can be practised as a real Zen Art or Zen Way (Zendo 禅道), similar to Hitsuzendo (筆禅道), the Zen Way with brush and ink. 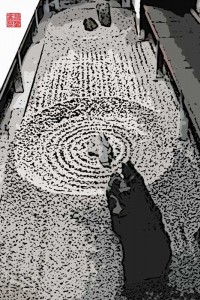 Recently I had the idea to extend Shazendo beyond just taking pictures by including certain steps of post-processing to completely change the look of the finished imagery. What sounds pretty technical and maybe far away from any direct and simple Zen approach is actually the opposite: I use modern digital techniques to get even closer to the images I have in mind (or, poetically speaking, I see with my heart) when pressing the shutter. It’s not just those accidental rays of light which happen to pass through my camera’s lens in a fraction of a second at some coincidental day and time that I want to communicate. It is the whole way of experiencing a certain location, a certain atmosphere, and it is also a dialogue with my artist ancestors’ past attempts to visualise the same subject.

Concerning Japan, a very popular traditional method of image creation is woodblock printing. Once considered a cheap craft for mass production, the artistic qualities of certain prints are nowadays beyond question, not just because of their strong influence on Western artists like Vincent van Gogh and others. While taking pictures in Japan I every now and then realised my view on a subject was pre-occupied (or sharpened) by certain woodblock-prints I had seen before, and from time to time I wished to capture a scene more in the coarse style of such a print rather than producing a high resolution digital image. 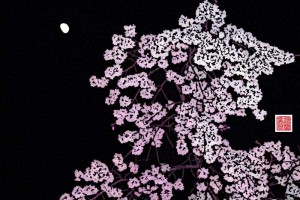 Recently I visited an exhibition of the European artist Emil Orlik, who went to Japan at the beginning of the 20th century to improve his skills in woodblock printing. What I saw inspired me trying to carve out this certain view from my own images, yet with 21st century digital technology. I am not really sure the modern process is anyhow easier to accomplish than the ancient craft, especially when considering that the artist designing the plot, the wood carver and eventually the printer used to be three different people. After various trial and error I eventually found a work-flow which allowed me to achieve some satisfying results, which come closer to what I actually saw and experienced than any plain photographic image.

A collection of my first tries with “woodblock-print photography” can be seen on my facebook page in the album “A View from the Outside”. Please enjoy!