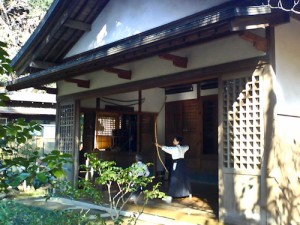 Kyudo-Dojo of Engaku-ji in Kita-Kamakura (Winter 2007)

When I am in Tokyo I usually do a day-trip to Kamakura and visit the Engaku-ji Temple in Kita-Kamakura. To the Temple compounds belongs a Kyudo (Japanese archery) Dojo, where visitors can observe the students shooting from the veranda facing a Japanese style garden. While the old master, Suhara Koun Osho, was still in good health he sometimes invited me for a coup of tea or to enter the Dojo and watch from the elevated position next to him. I always admire his friendliness and vitality, as well as the excellent performance of his students.

Once I read, I forgot where it was, that the advanced archer does not even loose concentration when the string of the bow ruptures. I have never seen this happen, but I imagine the concentration must be extraordinary to not be startled or even shocked by such an unexpected event.

Yesterday I had the pleasure to see another ever-vital master in action, the 72 years old Chick Corea with band. During the concert suddenly a big bang: the lower string of Christian McBride’s acoustic bass exploded in the middle of a solo. As if nothing had happened he just said “sorry” and played on. “You didn’t need this anyway” Chick Corea commented after the piece was finished, and McBride answered with a smile “no, three is enough…”.

That moment I was sure he’d even continued to play without any bass … true independence doesn’t just come from an intellectual decision to let it go, but from superior skills acquired through years of practice, in a moment of perfect concentration.