More than half a year passed since my last entry to this blog (let aside seminar announcements). My Dojo keeps slowly growing and I spend significantly more time with off-line (or “real world”) Zen than what I have left for reading or writing. Zafu and brush and ink instead of keyboard and monitor is not bad, I guess.

Also I got a bit tired from trying to formulate a Zen-Buddhist point of view towards what happens in the world.

The poor and hopeless elect a billionaire for president who does not pay tax. The civilised part of the world bombs Aleppo to ashes (or closely watches). The shadow of fascism is growing within a free and democratic Europe and beyond. How could I dare to hope the wise man from India, who lived two and a half millennia ago, had an answer to all this, or at least a hint towards establishing a point of view?

A Japanese proverb goes「一 隅 を 照 ら す」(ichigu o terasu) which can be translated to “shine in one corner”. The meaning is that at your very place or position you should give your very best. 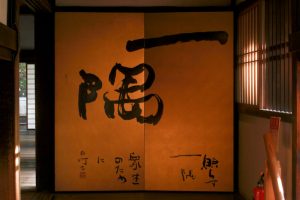 Overstrained from almost accepting a global responsibility, or at least “understanding”, while neglecting what is next, what is right under my feet, 「一 隅 を 照 ら す」is a reminder and a relief at the same time.

My former teacher used to say “My protest, my social activity is to practice Zazen now, here on my zafu!”. I did not understand and not agree … shouldn’t we cancel Zazen class and go out on the street, protest, act, interfere? Is not this the very meaning of 「衆生無辺誓願度」(shujo muhen sei gan do)? These days maybe I begin to understand … which is my corner to brighten up?

Ah, tomorrow we have an event at our Dojo, I better should sleep now …