Building water tight tanks is not a technical challenge. It costs some money, but already the Romans were able to perform this task on a large scale. How can it be that the Japanese government, the Japanese people accept that by far not enough effort is spent to build water-tight tanks for storing the contaminated cooling water of the collapsed Fukushima nuclear power plant, so radioacive materials are released uncontrolled in large amounts? 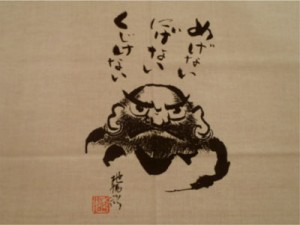 “don’t be discouraged, don’t run away, don’t let you crush”

In Kita-Kamakura at the Engakuji Temple I talked
this March with farmers from the Fukushima area who do not give up selling local products.With admirable persistence they advertise the quality of their vegetables, pickles and other goods. I could not feel any bitterness in their attitude, as if it was their fault people all over the country are concerned about radioactive contaminated food coming from their fields, and they now have to invest double effort, double friendliness to compensate.

I felt honoured by the invitation to give a scientific talk at Tohoku University in Sendai on
March 11th this year, the day two years after the disaster occurred. All people, be it farmers or fellow scientists I met in Tohoku region during the past two years shared a sincere attitude to not give up and do their best to re-build what has been destroyed by the earthquake and tsunami.

How can they, how can the world accept such a bravery is thwarted by a few others, who’s only interest seems to be saving some money?
–
Update: I received some feed-back saying as a foreigner I have no right to criticise Japan’s internal business.

Don’t I have a right to worry for my Japanese friends and colleagues? And as a scientist, I may add that the age of Japan (and more generally, of civilisation and mankind) is pretty short compared to the 24,100 years half-life time of Plutonium, which is stored and was released at the Fukushima plant. Spreading radioactive material is always concerning all human beings, world-wide, for ever (regarding human measures of time).

Another remark I received is concerning the relation of discussing such matters to Zen. Should a Zen-teacher not better silently sit on his pillow and meditate for the well-being of others, or at least for his own enlightenment? The above painting was done by the head-priest of the Jifukuji-Temple in Kasenuma. I’d be curious to hear his opinion on that … I imagine the fierce-looking Daruma on the painting might open his mouth wide for a big shout.