One or two blog posts a year is maybe a good frequency, avoiding a Zen blog becoming too blithering. Isn’t one pleasure of Zen that we do not need to say lots of words, but silently inter-act instead?

Beginning of December we had our Dojo’s year’s end party, and it was nice for everyone to meet in a less formal and relaxed atmosphere. End of the year also marks the end of my full-time engagement for the Dojo. A small group, modest fees and nothing much to sell on the “spiritual market” made it necessary for me to take up a regular full-time job again. The resulting change of schedule made first members cut ties with the Dojo shortly after. Was their going a long overdue and postponed step, or tribute to an overfull private schedule and the dependency of one’s own spiritual development on fixed days and hours … I will never know. 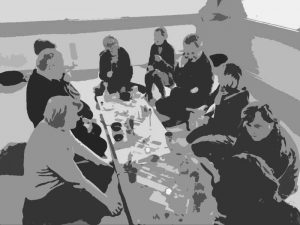 Year’s End Party at our Dojo.

Why why …? Isn’t a modest and frugal life on the Zen-Way possible after all? After decades of training and education, of sacrifice with strict teachers and dedicated study? Even Zen-people need to eat … when I emptied the donation box a few days after the party, I found somebody gave 15 cents. 15 cents to support your teacher and your Dojo. This is why.