The title of this post refers to a book I read last week: a thrilling report about how a few monks successfully defended the Tessajara Zen Temple (a branch of the San Francisco Zen Center) in 2008 against a huge forest fire, in spite of the strict advise from the fire fighting professionals to evacuate. The Temple was founded in 1967 as the first Zen Monastery outside Asia by Shunryu Suzuki, a Japanese Zen-pioneer in the US who’s Zen-talks are collected in the highly recommended book  “Zen Mind Beginner’s Mind”. 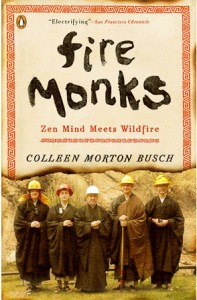 Most things coming to my mind while reading “Fire Monks” were discussed in the book and blog which updated the community while the fire approached and passed through Tessajara:

Is it bold or stupid risking your life for preserving a few buildings? Is it a sign of attachment to one’s belongings, or non-attachment to your own life if you do such thing? Shouldn’t they not have better listened to the professional fire fighters? What a loss for the community if someone died, compared to loosing some buildings? Didn’t all this in the end prevented a fruitful re-build from scratch? Were they just lucky when surviving … and what, if not? And so on … everything is already said and written.

What really got me in the end and made me belief they were not just a bunch of suicidal Zen-freaks: eventually, those five who returned to the burning forest to defend their Temple relied on their own responsibility and authority.

Nowadays we are so quickly and willingly listening and following the advise of “experts”. Be it a health problem, financial issues or a technical question … always “out there” is someone who knows much better than me. If I ask “the expert”, he or she will let me know the verdict about my case … if I don’t follow the experts’ advise or don’t even ask for it, I am likely being called stupid and ignorant. And experts often like to tell us the way they see things is without any alternative  (“alternativlos” is my German Angst word of the year).

What can I do then, aside from finding experts and ask them how I should live my life?

What does it mean in a Zen context to defend your Temple against the firemen expert’s advise? First of all, that you do not transfer your responsibility for your life and your actions to somebody else. It is your decision, your acting and your responsibility. Ideally, you know yourself better than anyone else does, and only you can decide what is your next step, your way … no expert can tell you this! Of course you need some expertise, also the “fire-monks” acquired certain fire fighting skills through numerous drills and thorough preparations. Developing the required skills for mastering your life is part of the game, and likely a bit more work than just asking the experts … but most important is knowing yourself, and for this, years of Zen-practise provide a really good basis.

So I admire the “fire monks” not just for risking their lives and acting bravely, I respect them for taking their own decision and realising their own responsibility to act (which as well holds true for those who decided to evacuate last minute). Not handing over to the experts, but knowing yourself and being expert of your own life wherever you are, whatever your task or duty may be, is the meaning of Rinzai’s Zen-Word 随処作主 立處皆眞  (ずいしょにしゅとなれば  りっしょみなしん).