I started this blog in May 2011 during my visit to Japan, soon after the Great East Japan Earthquake. Coming back six months later, Kyoto and Tokyo appeared to me as they did during all my previous trips. No more “energy saving” posters, none of the millions of cooled vending machines switched off, and the night in Shibuya was illuminated brighter than daylight. 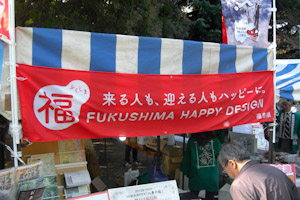 In Asakusa, besides the Sensoji temple, I saw an exhibition from the Fukushima region, with kabuki play, a soba noodle maker, lots of tourist advertisement and regional farming products and sake freely distributed and happily taken away by the visitors. The slogan of the event was “Fukushima Happy Design”.

I do so much appreciate the strength of the Japanese people not to bother others publicly with private troubles and emotions … but in the face of a disaster which has its causes, people and institutions responsible for it, and the possibility to re-occur, I felt so sad amongst the Fukushima locals, who see no other way than trying hard to keep on going as if nothing happened.

“Fukushima has been a place to bring you happiness. It’s not changed until now” one can read on the “Fukushima Happy Design” facebook page. I hope a change will come, for Fukushima and for the world. Let’s work together, that it will become more than just a happy new design …

P.S.: I have been asked about “Zen and politics”, if it would not be better for Zen-people to stay away from these topics, sit on the pillow and have no opinion on politics. Zen is politics, Zen is revolution. Human beings with a free and independent mind, taking responsibility for each other, not drawing artificial boarders between “me” and “them”, “me” and “the nature” or “me” and “the rest of the world”, this is Zen.