During sutra chanting there is a lot of ringing and gonging and clapping going on. It seemed almost impossible for me to learn how to do this correctly by just watching and memorising, while being busy with chanting and following countless lines of unknown syllables in the Sutra book. 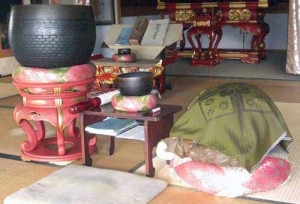 Today the Roshi came to our temple while I was doing Zazen on the veranda outside the Zendo during „free practise time”. I could hear him explaining to K-san some details of how to chant and how to use the gongs properly, and he corrected and humorously imitated his way of performing today’s morning ceremony.

I politely asked K-san later, if he maybe could show me what he just learned, and he replied that it was a very unusual event, the Roshi never instructed him this way before. He let me try a bit with the big Mokugyo and the gongs, and corrected my handling and timing. “Maybe Roshi will show you later!” he concluded his lesson … a privilege I silently doubted the short-time guest to his Dojo will be granted.

To my big surprise, in the afternoon we were sitting next to the Roshi in his temple, and he demonstrated for us in all detail how to use the gongs of different size while chanting. Several times he jokingly mentioned that foreigners cannot do this correctly. In the end he gave me a Japanese book with all relevant Sutra and explanations in, “日本語がわかる …” he said, overestimating my still far from fluent language skills.

I am very happy about this unique chance to improve the Sutra chanting at my Dojo from the Roshi’s first hand explanation. Though I will stick to a much reduced schedule concerning the number of Sutras and length of the ceremony. Not just because I am “foreigner” … I guess it is important, next to a good performance, to also have the chance to really understand the meaning of what you are chanting. How much of your life-time you really can spend to memorise, copy, translate and deeply reflect ancient Indian texts you learned in a Japanised version of ancient Chinese pronunciation …?