In March I embarked for what I thought would be my last visit to Kyoto for a very long time, maybe forever. While saying farewell to my favourite places, my friends, “my” Temple and the old Master, I thought a lot about “letting go” and the impermanence of living … it was a happy and sad two weeks of good-bye, two weeks of leaving from the first day I arrived. 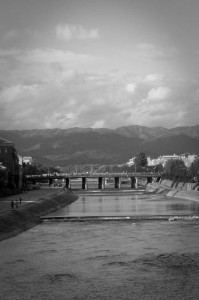 Not even two months later I was back. Completely unexpected an invitation from Tohoku University made it possible to visit Japan once more, and I extended my stay with few days in Kyoto. Standing on Shijo Bridge looking up the Kamogawa towards Sanjo Bridge and the misty mountains, I felt really puzzled. Back again, so soon! How wrong was I with my expectation of not seeing again my beloved second hometown … even impermanence is not so permanent!

Zen practice helps us to deeply realise some fundamental aspects of human life, to see things as they are. This cleared view comes along with a certain danger for our mental health, when the Meal of Zen is only half digested: after leaving behind most of the big illusions we grew up with, life as it really is might appear a bit like a threadbare patchwork of unpleasant or boring circumstances, agitated by mostly unpleasant others going on our nerves with their unnecessary and weird activities. Everything good and pleasant will eventually vanish, each cup is already half empty if not broken the moment we fill it. Possibly this is a reason why intermediate Zen students may become a bit nerve wrecking companions with all their complaints about the bad world and evil others? 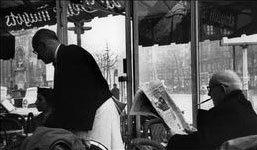 I am not sure if the one coffee I recently enjoyed at Les Deux Magots qualifies me for the speculation that this is the state of mind where the existentialists got stuck: a pretty clear and illusion free view of the world, a world though, which was misunderstood as permanent in all it’s misery. A perception of the world which is maybe most clearly described in the permanent hell of Sartre’s Huis Clos.

The ultimate experience of Zen is a deep realisation that nothing is fixed, not even the bad and horrible, the depressing and boring. Seeing the world as it is means seeing the world as impermanent, as ever changing. There is no fixed me and no fixed you. “L’enfer, c’est les autres” looses it’s painful grip, when we realise that neither me nor the others have any permanent existence. This is the meaning of the often quoted and often misunderstood “Emptiness” in Zen: the emptiness of any intrinsic existence as a big relief!

That’s easier said than understood. I belief the idea of impermanence, of not having an intrinsic existence, a fixed self to discover or defend and possibly improve the one or other way is a pretty scary concept to the inexperienced mind (and for those running the self-optimisation business). Impermanence of virtually everything is not understood as a way out of all the misery until one gets ultimately rid of all the nice illusions, the “flowers decorating the chains”, and feels absolute despair emerging from an illusion-free perception of the world. No earlier the realisation of impermanence kicks in as a great relief!

The coffee and service at Les Deux Magots was the best I enjoyed in Paris, and by far not the most expensive one. I did not expect this at such a prominent location! Next to all the book shops my new favourite place in Saint-Germain-des-Prés … if I have a chance to come back one day.