Every day I practice calligraphy, and often I take pictures. Occasionally, I take pictures of calligraphy. The picture below shows part of my face in a calligraphy I photographed at Tenryuji temple in Arashiyama (west of Kyoto) in October 2010. Originally I had the intention to filter away all reflections (including my face) to just show the dynamic brush-strokes … but during post-processing, this very shot ignited the idea in my mind to combine calligraphy and photography in a creative way. 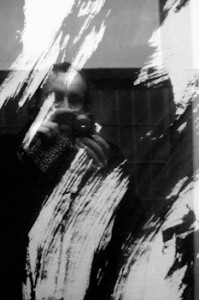 Writing calligraphy and taking pictures feel all the same for me: full
concentration, completed in one breath and the final piece is finished
in my mind before the brush touches the paper or the shutter is pressed.
Yet, lots of uncontrollable parameters result in the uniqueness of each
effort, which at best contribute to it’s beauty and are welcome in any way.

So I thought about various possibilities of merging both. Most obvious would be writing on beautiful solemn photographies of landscape and nature (preferably in black and white), a modern version of Chinese ink paintings with some text. But somehow so far I did not find the idea interesting enough to realise …

Another way could be interweaving calligraphy and photography during post-processing in a most creative way, like this picture by Stefan Eichberg, displaying the calligrapher Kaoru Akagawa in one of her works. Though, simply mixing brush-strokes and pictures, which have not much in common besides both residing on my computers hard-drive, seems too much of an artificial concept.

How can I realise a dialogue between traces of ink and rays of light, beyond all theoretical concepts, on one sheet of paper?