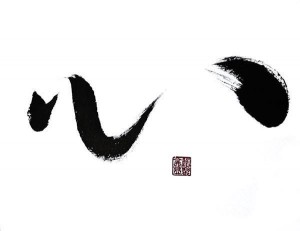 It is raining outside and cold inside my Dojo. I came earlier today because someone was interested in buying a calligraphy. Though, what I had to offer seemed beyond the friendly ladies budget. How much for an original piece of art? Five times the price of an IKEA poster? 300.000 of my calligraphies for the money Andy Warhols “Six Self Portraits” changed owner at Sotherby’s last year?

I had to sell three large calligraphies to pay my Dojo’s monthly rent, though usually I sell one every three months. Never mind, there is some small income through regular and irregular students, and the landlord agreed to cut the rent to two thirds for the time being. But maybe I have to close down this year anyway … it doesn’t matter.

While waiting if someone would show up for the Zen Introduction Class I offer twice a month (every 1st and 3rd Friday) I have some time to practice Shakuhachi, the Japanese bamboo flute. My former Shakuhachi teacher passed away last October, never will I have another lesson with him. Yet I meet with him every time playing his hand-made flute while reading from the music scores he brushed for me over a decade ago. These dialogues with my late teacher, what a special, precious exercise!

I read a friend’s article about Zen-Moneymakers (1), and later a carelessly edited flyer with pictures of nice Japanese temples and tea houses advertising a planned Zen Temple and Seminar Centre in Bavaria (2). The flyer talks of a “Zen-Master-House” with an area of 150 square meters, which “is also an example for a small tea house”. A small tea house measures 4 1/2 tatami, a bit more than seven square meters. 20 small tea houses would fit into this Zen Master’s home … our European sense for space and modesty?

My Iaido teacher was so poor that in the end he sold the ancient swords and books he brought from Japan. My Zen and Zen-Calligraphy teacher lived for many years in a small room as a subtenant. The Zen-Temple in Japan I occasionally visit for practise ran out of food and later toilet paper (fortunately in that order) last time I was there, and my late Aikido teacher used to carry his dogi and hakama (cloths for practice) in old plastic bags. Poverty is no indicator for quality of course, but none of my excellent teachers had more than necessary to live.

Nobody came for the introduction class that rainy Friday evening. After I decided to charge a modest fee for the hour and a tea, visitors became quite rare. It seems “Zen-for-Free” and “Zen-Moneymakers” is a business model, a little donation to keep the Dojo running might be asking too much.