Some time ago I wanted to attend a one-day Zazenkai conducted by Brad Warner near the place I live. I never met him, but I once read one of his books and thought it might be interesting to see him in person. It did not come true, I caught a bad flu and had to stay in bed all day long … I mention this because the on-line registration procedure for the seminar was quite remarkable: I had to specify weather I was “beginner”, “lay person” or “ordained”.

I don’t remember anyone ever asked me such question. Maybe, when leading seminars or Sesshin the participants assume I must be a “Zen Monk” because I am teaching? Or they assume I am not a “Zen Monk” because I am not Japanese, or because I still have some of my hair left and occasionally talk of my daughter? Very likely they don’t care at all about ranks and titles and are more interested in what I am saying and doing … 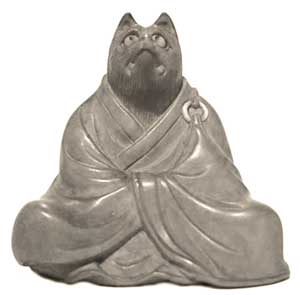 Recently I read an article where some American Zen teacher describes his life as an ordained Zen Monk with having a job, a family, a house, a car, a mortgage and a life insurance, very much like anyone else. I thought that’s interesting … so what does it mean then, being a “Monk”? And in addition, maybe we might need a new name for those who indeed give up all their belongings, forever leave home, shave their head, live in celibacy only from begging, and who spend all day and night in meditation, studying and teaching the Dharma?

I am not in preference of the one or other life-style, both come along with few advantages and severe hardships. Yet I have a certain feeling that imagining a “Zen Monk” busy fixing his carport roof on a free Sunday afternoon while his wife expects him to finish soon and help preparing some snacks before the members of the local school committee will come over for their monthly meeting is slightly disturbing. I imagine the same person, dressed up in a Japanese style robe during a weekend-long Zen-retreat might derive advantage from the cliché of an austere Monk having spent years in unheated Temples somewhere high up in the mountains together with his old Master, just coming down for a few days to offer his teachings.

If asked in person (and not by a web-interface), how would I respond? Living with a family, a job, having some belongings (even an old car) … yet leading Sesshin, giving Dharma talks, once receiving what is called the 10 Grave Percepts and a Dharma name, and from time to time living in an unheated Zen temple in Japan – someone who is going and sharing Ways of Zen? What is that? Cheekily I borrow a prominent testimony from an ancient Japanese Buddhist (not from the Zen branch), who described himself as “非僧非俗（ひそうひぞく）”Neither Monk nor Lay Person”. This concept is almost 800 years old … yet, for some Zen-practitioners it might provide a surprisingly fresh and honest inspiration.

Though, if forced again to select from a pre-defined multiple-choice, I’d not hesitate to chose “beginner” again …