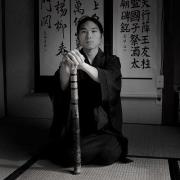 Last weekend I attended a concert and workshop given by the young shakuhachi master Yoshida Koichi in Cologne. For many years I had studied the shakuhachi in a very traditional way with an old Japanese master, but in spite of all technical progress, I never could become really one with my instrument. Frankly speaking, more often than not I even did not very much like listening to my own performance…

It was a new discovery, and practising the old Honkyoku (ancient “original pieces”) in my Dojo this week, I really love listening to my shakuhachi’s sound. It is such a pleasure to play, while through the open windows of this lovely countryside house the bird’s singing can be heard. Maybe, over the years of practising the flute, I had lost a bit my beginner’s mind…?