Before going to China, I wrote a calligraphy with the Characters of “willow” and “wind”, yanagi ni kaze (柳に風). The person to whom I gave it, I explained the meaning is “a willow survives the strongest wind and heaviest snow, because it bends under the load and comes back up straight after the troubles are gone”.

In Beijing I was astonished and happy to see very vital Buddhist temples with monks practising and lay people joining a Sutra chanting ceremony. It seems, the barbaric years of the culture revolution could not eradicate this part of China’s rich cultural heritage. 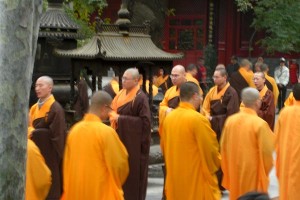 But I was mistaken in my naive assumption that finding a Zen temple is as easy in China’s capital as it is in Kyoto. The nearest one, I was told, is hours by train and bus. Could that be true? So I had to give up my idea to practise Zazen in a Chinese temple for this time.

Though, if I ever come back to Beijing, I wish for a chance to bring some Zen back to its roots.