Over the 13 years I worked with my former teacher, I took many pictures of him, including a short movie. But none of them came close to the one we shot in his Dojo in spring 2006.

We wanted to produce some material for a webpage and a book, still with my old analogue camera. Soon I sensed nothing worked: flash or not, additional light or not, I was not able to capture that specific silent and concentrated atmosphere present in the room when he was writing his calligraphy. 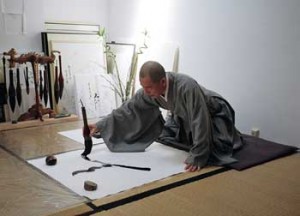 Suddenly, for a moment, the sun came through a gap in the clouds and flooded the Dojo with the most fantastic light. I said “Now!”, and without hesitation he took the brush and started writing a powerful 気. I took the picture, and a moment later the sun was gone.

No other photo we shot that day was anyhow good, but this one we used for many years to come…