Martial artists often share a particular affection for the Katana, or Japanese sword. In contrast, pacifists usually express aversion against any kind of weapons. The idea that Zen has certain links to the exercise with the Katana can therefore be surprising.

Let aside historical roots of medieval Samurai performing Zen-training, more contemporary masters of Zen and sword-fighting, and a terrible misunderstanding of Buddhism by some distinguished Zen masters, leading to hilarious justifications why it is o.k. to kill …  what can the exercise with the Japanese sword provide for a western non-crazy Zen practitioner? Is it just an overcome, old-fashioned militaristic right-wing Japanese thing we better should avoid? 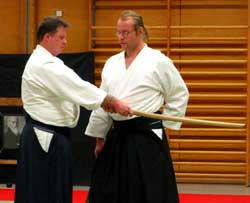 After the second world war, Morihei Ueshiba, the founder of Aikido, developed a new concept of practising with the wooden sword or bokken. From my Aikido teacher, Kobayashi Hirokazu, I learned this style, called otonashi no ken (音無しの剣), the silent or calm sword. There is no aggressive posture in otonashi no ken, no attack, and especially no idea of cutting down an opponent.

This bokken exercise is all about oneness with the situation, breath and timing, decisiveness and bold action in the face of a violent attack. No thought of killing or showing off with a weapon, and therefore not at all aggressive in its appearance … nevertheless, very efficient.

Although its origin is not related to Zen, I consider otonashi no ken a perfect Zen exercise. In my teaching, I want to promote this new and peaceful link between Zen and sword, giving a new and non-violent aspect to the old proverb that “Sword and Zen are One”: 剣禅一如 (ken zen ichi nyo).