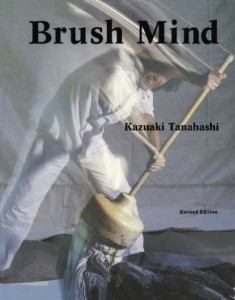 On the cover of the book a young black-haired beardless Kazuaki Tanahashi is vigorously swaying a monster-sized brush. Tanahashis “Brush Mind” has served me for almost two decades as an inexhaustible source of inspiration for my own education and work in Japanese calligraphy.

You can’t hide anything in a line

is just one quotation from the beginning chapter of “Brush Mind”. A sentence I am still exploring in its fathomless depth. You can’t hide anything. This is truly a Zen statement. No fake, no pretension, no want to be something else. This is it, nothing to hide.

A friend told me he once witnessed the late Abbott of Ryutakuji Zen Temple in Mishima performing the Morning Ceremony (a very formal daily event in every Zen Temple with lots of bowing, reading many Sutra and sounding the gongs) stark naked. I can hardly imagine which impression this demonstration of nothing to hide left on the young monks. 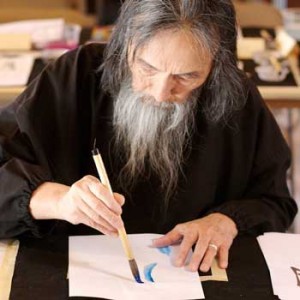 A few weeks ago I was lucky to see Kazuaki Tanahashi for the first time during a performance and film show at the Cologne Museum für Ostasiatische Kunst. Grey haired, with a long beard, now over 80 years old. The prototype of an old sage. His performance was of utmost simplicity and friendliness, such a pleasant contrast to some other calligraphy performances I have seen, where the artist tried to pretend a “Zen-Spirit” by many kinds of priggish behaviour.

Tanahashi just explained some basics with a good sense of humour, not the least bit disturbed by a constant noise level of people coming and going. Then he brushed two pieces in an effortless yet highly concentrated manner. It was like witnessing the promise of the younger man’s book fulfilled by the action of the old Master.

When I put my one-breath stroke next to his, I can see not only a gap of 30 years in life experience and Zen/Calligraphy praxis. I see, in embarrassing contrast to my own attempts, a line brushed by a person, who does not want to be anything else, who does not even care to draw a line nicely. 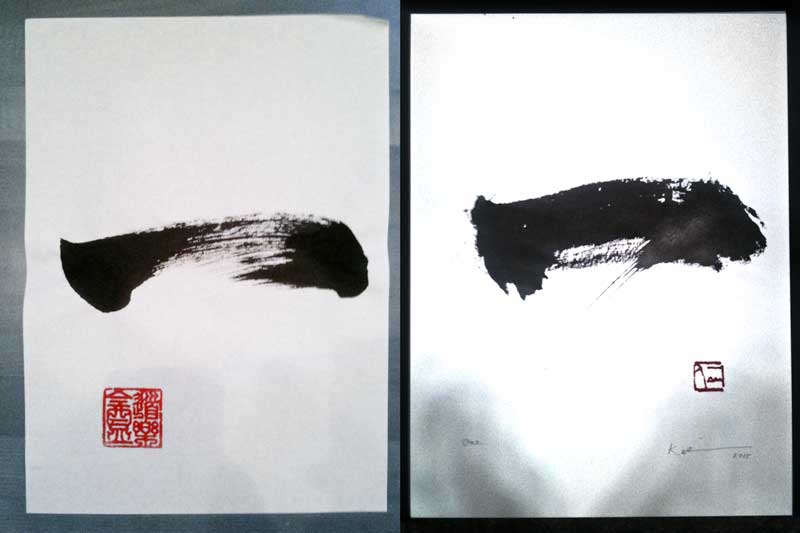 Tanahashis “ichi” (right) next to my one-stroke calligraphy (left).

Just this, nothing to hide. In 30 years time, will I be able to brush so careless, selfless, without any refinement?

Refinement is my enemy

wrote Tanashi in “Brush Mind”. What is my slightly refined and maybe even a bit elegant stroke trying to hide? How to draw a single true line? The answer is also given by Kazuaki Tanahashi:

To do this, you have to be fearless.

All quotations from Kazuaki Tanahashi: Brush Mind, Parallax Press (revised edition, 1998).
Kazuaki Tanahashis webpage is http://www.brushmind.net/ .
The film I mentioned is the documentary “Painting Peace – The Art & Life of Kazuaki Tanahashi” by Babette M. VanLoo.
Kazuaki Tanahashis “one stroke” is rendered from my photography of his work on display after the performance. I assume all rights are with the artist, and very much hope he doesn’t mind I share this low quality/resolution copy in my blog.