Photography is a great way of communication. One can tell a long story with all it’s circumstances, atmosphere and emotion in just one picture, without words. 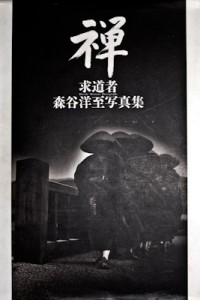 Last December I found an old book at the Temple in Kameoka with fascinating pictures taken at a Zen Monastery. It was not just a documentary of the Monks’ daily life, the photographies transmitted an atmosphere of participation, as if seen through one of the fellow Monk’s eyes instead of being taken from a safe distance through a camera’s lens.

I learned that the photographer, Hiroshi Moritani  (森谷洋至), after being granted permission to shoot at the Monastery showed his initial series of work to the Master, but was turned down with “your pictures reflect you do not understand anything of our life!”. So Moritani decided to join the temple for a longer period, participate the Monks’ life and demanding daily routine, and then produced a new series of photographies, now full of understanding and compassion.

This style of Zen Photography is not observation and documentation from a safe outside position. The camera, too often creating a distance or barrier between the artist and the object, completely disappeares. Once the photographer is totally immersed in a situation, fully part of it, pictures can be taken from inside out, as looking through your eyes.

No surprise that Hiroshi Moritani is convinced that Sha-do (写道), derived from Shashin (写真, the Japanese word for photography) will be practised and accepted as an art or Way (道) similar to Shodo (書道), the art of writing with brush and ink, or Kado (華道), the art of flower arrangement (also known as Ikebana). And the same way Hitsuzendo (筆禅道) was developed from Shodo (書道), I believe a Shazendo (写禅道), a Zen Way of Photography, can emerge from Hiroshi Moritani’s Shado.