Registration for my next Zen-Ken-Sho Sesshin at Benediktushof Holzkirchen (July 19-22) is open, and usually I get the one or other question in advance how I split the time between Zazen, Aikiken (Aikido exercise with the wooden sword, bokken) and Hitsuzendo (Zen-calligraphy).

Is it too many hours sitting for me? Do we write long enough? Too much physical exercise?

I want to reply “Come and see, join in! No one will force you beyond your limits!”

In his recent blog post the American Zen-Punk Brad Warner (also teaching at Benediktushof from time to time) address this issue with “Zen plus Something” seminars:

Now if you sign up for a “Zen and Yoga” or “Zen and Calligraphy” or “Zen and Skeeball” or “Zen and whatever” retreat at some places I’ve spent time at, what you’ll get will be a lot of yoga or calligraphy or skeeball and a small amount of (almost always optional) Zen. Meditation centers generally know that actual meditation is a tough sell and often minimize or very nearly eliminate actual sitting from the schedule.

Really? I had no idea … except for the 13 years I worked with my former Zen and Hitsuzendo teacher, and later during my visits to Japan, I never attended any other Zen Sesshin. I have no idea how others do it … just a little bit of optional sitting, does that make sense? 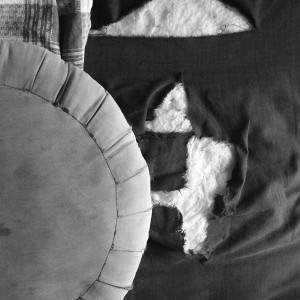 My Zafu (pillow for Zazen) at Tekishinjuku in Kameoka.

In my own experience (which I do not intend to generalise for everybody), Zazen, the practise of sitting meditation, is something which cannot be replaced by any other exercise, and for sure not by reading books or washing dishes. It is a really good investment of time and energy to overcome the many kinds of initial difficulties, and develop a strong and sustained Zazen practise. This provides a really good foundation for exercising the many kinds of Zen-Arts, including reading books and washing dishes.

Just practising calligraphy, sword, yoga … whatever during a “Zen plus X” seminar, but skipping Zazen, is what my former teacher called “eating the foam but not drinking the beer”.

Brad Warner wrote that during his Zen Retreats participants usually practise three and a half hours Zazen per day, which in his eyes is “the perfect amount of sitting for both beginners and long-time practitioners”.

In my Sesshin we practise four hours Zazen per day, but twice 25 minutes are (really!) optional. In between we have two longer sessions for Hitsuzendo, followed by Aikiken. A short and simple tea-ceremony (sarei) in the morning, Aiki-Taiso (physical exercises similar to Qi Gong) and Sutra chanting twice a day. Plus (optional) private interview with me in the afternoon and (not optional) one hour Zen-Style working period (samu) for the house. This is quite a lot, so we start early in the morning.

Still I get the impression the participants of my Sesshin are suffering from too many breaks, too much leisure time, sleep too long and go to bed too early. Well, not all of them … when during the breaks most enjoy a coffee, do a walk, rest in their room or spend time and money in the book-shop, occasionally the one or other comes to help me: preparing and cleaning the Zendo, folding newspaper for calligraphy or sorting and throwing the many sheets of paper we wrote is a never ending Zen-exercise. And suddenly the day is full, 5 a.m. until 10 p.m. with no more breaks or leisure time. This is what I call advanced practise …this is the way I studied with my teacher how to conduct a Sesshin: no break, not a minute free time all day long and half of the night. Well, except for a coffee after lunch, maybe …

“Do you also teach advanced seminars?” participants of my Sesshin occasionally ask. “Yes, sure!” I reply, “during the breaks!”.