Very different people come to my Sesshin and Dojo, and a few of them have studied much more things, met many more teachers than I ever will. Often the exchange concerning their experience is really interesting. Some have worked with great teachers I only know from the one or other book I read during my student times. Karlfried Graf Dürckheim, Nagaya Tetsuo, Tanahshi Kazuaki … these masters once laid out the map for my own spiritual journey, and I feel touched now working with students who have actually met them.

Some other visitors introduce themselves with “I practise Yoga and Tai-Chi, and I am green belt in XYZ-Do”, “I was a Tibetan Buddhist but now I do Soto-Zen, but actually I am more a Daoist”, “I am Reiki-Master and traditional healer and my inspiration is a lot from North American Indians”, “My Master is the famous …  you haven’t heard of him? Btw., last year I met the Dalai Lama and Thich Nath Hanh”.

A maze of Ways, so many prominent names … a spiritual bag so over-full. I feel dizzy, after just a few minutes casual introduction.

Compared to these guests, my own focus is pretty narrow. I worked with just one Aikido teacher, and with his students. Only occasionally I attended seminars with other disciples of Ueshiba Morihei, the founder of Aikido: Tamura Nobuyoshi, Yamaguchi Seigo, Asai Katsuaki were great inspirations … though all I really wanted to practice was the Aikido of  Kobayashi Hirokazu. The same with Zen and Hitsuzendo: after some initial random-walk, I worked for 13 years with just one teacher. Now I exchange occasionally with another Master, who was my former teacher’s senior at Sogen Omori‘s temple. 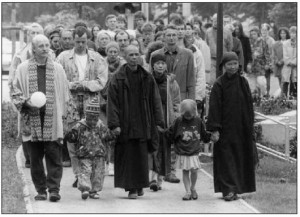 I believe there is nothing one can really learn in a few week-end seminars, during a year or two visiting some teacher maybe once or twice a week, or from seeing a spiritual celebrity once in your life. Maybe one can pick up a few ideas, names, phrases … but isn’t all that superficial study nowadays anyway much easier with google and youtube?

When Thich Nath Hanh once came to the city where I lived as a student, I preferred to go to the daily Aikido class instead of joining a “walking meditation” organised with the prominent visitor. I was sure to benefit more from the day to day encounter with my own local teacher. Actually, I would have felt guilty not attending his class and spend time with someone else instead.

Very much I enjoy the experience of studying more than just one Way, one art. In this point a disagree with my former Shakuhachi teacher, who condemned any practise besides playing the bamboo flute (and even working to earn money for paying his lessons seemed not o.k.). I don’t believe in a too narrow focus, in the one thing. Yet, studying a Way or several Ways is a life-long journey asking for a dedicated daily practice. Nothing worthwhile which can be picked up on the go. The first ten years, the first 3650 hours you are a beginner, regardless what you do. After this initial period, the time of serious study begins …