I was born 20 years and a few months after the Second World War ended. Probably I would not sit here today and write a Zen-blog, if you did not come over to free our country from my grandparents generation’s murderous system. 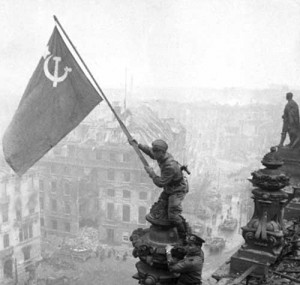 Said that … maybe I would exactly sit here and write a Zen blog, in case Hitler’s fascist regime survived. One of the shocking discoveries I made while deeper getting into Japanese Zen and Martial Arts was, how much mutual sympathy between Nazi leaders and Japanese traditionalists existed – far beyond a military ally of the so called “axis powers”.

The mutual understanding of the German and Japanese culture circles (Kulturkreis) is comprehensive and sincere. Its further consolidation is a fundamental condition for the leadership in the worldwide battle, in which both befriended nations are involved, and for a new world order, which exclusively can be established through a close collaboration of both nations.

The German-Japanese friendship is far beyond politics and military a deep-rooted communion, which is based upon an unshakable ideological and cultural basis, and therefore determined to last for a long time.

I get a cold shiver not only reading these lines, but also when German martial artists today naively talk or write about “traditional Japanese”, referring to a system which was forcefully created before and during the Second World War as a fascist and militarist ideology from shinto and samurai roots (not to forget the support of certain Buddhist scholars, but this is another discussion …). Don’t some of us live out their desire to follow (or play) Führer by putting on ancient Japanese cloths, swinging a sword and shouting commands with a harsh military voice?

“Don’t put your hand so straight on the saya!”, my former (American) Iaido teacher scolded me, “standing like this with a sword is a fascist posture!”. I wish, all of us being interested or deeply involved in Japanese (martial) arts would be so considerate, avoiding a possibly naive re-import of neofascist rituals in the disguise of a misunderstood Asian tradition.

At least this effort we owe to those who risked or sacrificed their life to free our country!

–
(1) Quoted from the foreword of the 2nd edition of the photography book by Younosuke Nattori: Gross Japan (Dai Nippon), Karl Specht Verlag, 1942 (my English rendering of the German text).