The ancient name for the Japanese bamboo flute Shakuhachi is Kyotaku (虚鐸), which means “false bell”. Legend has it that the Chinese Monk F’u Hua Ch’an Shih was ringing a bell when he went begging. His want-to-be student Chang Po, though being rejected by F’u Hua Ch’an Shih, tried to imitate the sound of the bell with his bamboo flute. 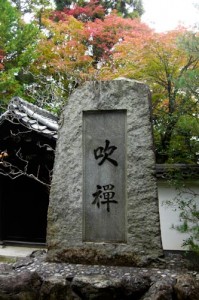 I consider the idea quite inspiring that the Shakuhachi origins from the imitation of a bell by a rejected student, though nowadays it is believed this legend was just made up by the Komuso, the Shakuhachi playing monks of the Fuke sect.

While the modern Shakuhachi, which developed since the Meiji era, is just for musical performance, the ancient sound of the Kyotaku can still be heard at hidden places. Many of it’s followers insist their practice of the original pieces, the Honkyoku (本曲), is some kind of prayer and never for public performance.

In my Dojo, playing the Kyotaku is performed as “Blowing Zen” (Suizen 吹禅) practice, and instead of reciting Sutra after Sutra. Said that, I believe that like the music of J.S. Bach, which extended beyond its original religious purpose in Western culture, the Kyotaku has a similar potential. Be it a prayer, a Sutra recitation or just music, the sound of the Kyotaku is able to directly touch the listeners heart, independent of his or her religious or cultural background.