In our Western culture, statues of Buddha and Hotei (the latter usually mixed up with Buddha) became popular decorative items. Posters, garden decoration, candles, bed-sheets, soaps, ash-trays … walking through the city, a look into the window of a cosmetic-, cloths- or book-store might offer a sight of Buddha or Hotei in a more or less creative alienation of it’s traditional setting.

I never really considered this blasphemy. The meaning of a symbol depends on the context, and in most cases the Buddha or Hotei kitsch symbolise in the West a kind of vague “Asian feel-good” … not my coup of tea, but no big problem either. I don’t believe many of us who replace their parents’ garden gnomes by Buddha or Hotei intended to insult Buddhist believers. 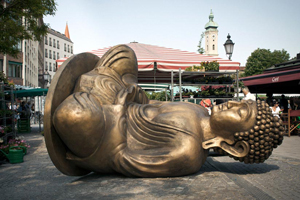 Said that, I can understand that someone grown up in a Buddhist culture might feel disturbed. If he happens to be artist and invited to design an object for display in a German city centre, why not comment on the flood of decorative Buddha items with a super-sized lying souvenir Buddha? Maybe the one or other tourist or citizen might realise how this originally religious symbol was transformed in our culture from something “Holy” into something “Made in Dresden“?

That is what happened in the framework of a Munich art project entitled “A space called public”. And following an old tradition, the messenger of the bad news gets punished: the Munich lying Buddha causes a storm of protest and uproar.

Not too much disturbed appear some locals with their typical distinction between “mia” (us) and “Preissn” (Prussian, a Bavarian pars pro toto for the rest of the world):  „Oa Preiß mehr is a scho wurscht“ (Another Prussian more does not matter) I read as the comment by a laid-back Munich aborigine.
– 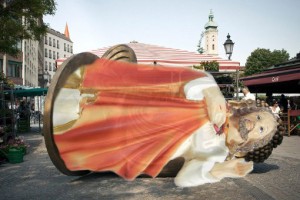 P.S.: The Munich Culture Department is quoted with “a few middle-aged man with Asian spouses” submitted complaints. Well, it wasn’t me … but the comment inspired me for some contribution to the inter-religious dialogue which was triggered by this art installation. Without intending to insult anyone, I call it “a symbol is just a symbol”: