Occasionally I follow discussions on the world wide web concerning the one or other well known Zen teacher. Brian Daizen Victoria for example performs a tremendous, widely and controversial discussed research work on the role Japanese Buddhists played during World War II (1). What I find interesting in such discussion is not in the first place the evaluation of the detailed amount of shame and guilt outstanding Buddhist representatives loaded on their shoulders. I wonder more which motivation drive such a person’s defenders, seasoned Zen practitioners and scholars who often see themselves in the lineage of the teacher in question. 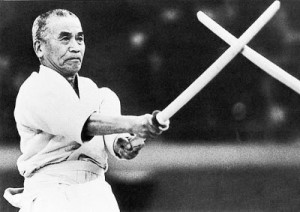 My former teacher, as well as the Zen Master by whom I was ordained, were both direct students of Omori Sogen Roshi. I follow Sogen’s way of Zen by practising and teaching Zazen together with Hitsuzendo (Zen Calligraphy) and Martial Arts, namely Aikiken (Aikido practise with the wooden sword). I consider myself very lucky for having had the chance to learn from disciples of a great Master who integrated three of my major passions into his teaching.

Yet I have all evidence to believe Brian Victoria is simply right when he concludes “I submit that Sogen was nothing short of a “Zen-enabled terrorist” dedicated to establishing a fascist state in Japan (…)” (2).

This severe conflict is fuelling my work and inspiration, it leaves no doubt for me that I have to investigate and question and possibly re-interpret if not re-model each and every detail of what I have learned. No way I simply quote “The Master” or refer to “Japanese Tradition” in order to underpin my thinking and doing. In my own modest day to day Zen work, which I perform in the lineage of Omori Sogen, I am for sure quite the opposite of a fascist Zen-enabled terrorist, or apologist of such a person’s way of thinking.

Do we need to believe our teacher(‘s teacher) was perfect? Should we even wish for it? I don’t think so. My former teacher often said “better not so perfect teacher, so the student can excel his teacher one day”, and “closely study advantage and disadvantage of your teacher”. Such a point of view keeps a healthy distance to the idealised image of a perfect and flawless Master, and it also might prevent us from entering exhausting discussions in defence of the indefensible.

By and by in the course of our limited life span we have to grow up and become independent of those who once guided our steps. It is not necessary we carry on their heavy loads on our own back, until the end of our days. It is not appropriate we refer to their heavy load each and every time we are questioned for our ways and proof of whereabouts. Is it not our duty to keep the rucksack light, by carefully examining each and every heirloom our spiritual ancestors left behind?

Re-iterating the faults and de-tours of our teachers is not following the way they taught us. After I learned my lesson from their good and bad example, it is my obligation to neither re-do nor defend their mistakes and crimes! In this life, I have to go My Way … and happily admit it adds a new twist to the lineage I do my best to continue.

(1) See, e.g., Brian Victoria, Zen at War, Rowman & Littlefield Publishers (2nd edition, 2006) or recent articles published on-line in the Asia-Pacific Journal.
(2) Brian Victoria on Sep. 8th, 2014 in a reply to the discussion of his article “The Non-Self as a Killer” on Sweeping Zen.