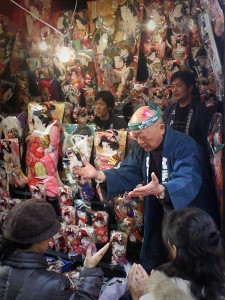 “What is the meaning of that doll?” I heard the American tourist asking a shop owner at Asakusa’s Hagoitaichi, and after looking into a puzzled face for a second or two, she decided “It must be some good luck charm, isn’t it? I buy one!”. After she left, the shop owner (still puzzled) asked his colleague “Meaning?”, and he replied “Meaning … 意味ですね。じゃ。。。意味は。。。意味じゃないかね。。。” (Meaning … Meaning. Hmmm … the meaning is … it has no meaning, or …). 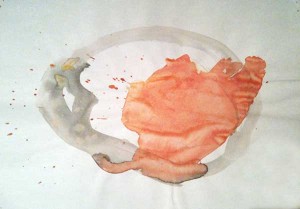 Pig wit a fence (my daughter about age 3).

A few weeks ago I attended a calligraphy performance by the Japanese artist and Zen teacher Kazuaki Tanahshi in Cologne. A lady asked about the meaning of the Zen circle (Enso) being open at the bottom. 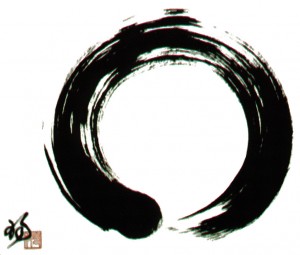 “Enso” brushed by my former teacher. Watch out for the pig’s escape!

Sometimes my students ask me the same question when we practice drawing the Enso at my Zen and Hitsuzendo Sesshin. I always reply (borrowing my daughter’s idea): “It is open, so the pig can escape!”.

When she was little, many years ago, my daughter used to draw “Pig with a fence”, a circle with a dot inside. Once seeing my former teacher’s beautiful Enso she complained “The pig is missing!” … and quickly concluded “No wonder, the fencing is open. It escaped!”.

Beware, when you ask for meaning in Zen, you might get some answer …