Recently I read on tricycle that “Roshi SoandSo” had passed away. I guess he was a fine guy, and probably a good Zen teacher. May he rest in peace, or be re-born, whatever he prefers.

Roshi SoandSo is a particular way of employing the term “Roshi” within Western Zen circles. Placed in front of the name makes it sound like an academic or cleric title, “Professor”, or “Abbot”. This practise is bluntly ignoring the common usage within the context of Japanese language, where a title or rank always follows a name: SoandSo Roshi, SoandSo Sensei, …

It is a practise dating back to the early days of Zen taking roots in the West, as documented in the very first issue of the “Wind Bells” from December 1961 (1). 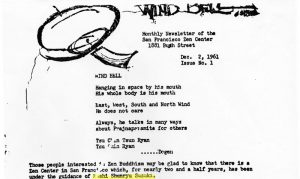 While “Roshi” literally translated means “Old Teacher”, in a Japanese Zen-context it is exclusively used for those few outstanding Zen Priests who qualified as Shike: leaders of the Monks’ training hall.

There are numerous accounts of especially Soto Zen priests, who felt awkward or even embarrassed of being addressed as “Roshi” by their Western students. Shunryu Suzuki was just one of them.

Calling one’s Japanese Zen teacher (who might just be a well educated temple monk within the Japanese system) “Roshi” is one thing. Employing it to a Western Zen teacher is almost a pars pro toto for a Japanese Tradition Cult which serves nothing more than elevating the business (and probably ego) of Zen teachers in the US and Europe by means of fake titles.

Nothing wrong of course with giving the term “Roshi” a new meaning in the West! Why not call everyone who is adequately withered and who completed his or her Zen training in a sufficient way to teach  (according to our needs)  a “Roshi”? Well “in deference to perceived Japanese Zen tradition”,  as the Wikepedia article on “Roshi” states about usage of the title in Zen communities in the United States.

But that is exactly not what is going on with all these “Roshi SoandSo”.

“Zen institutions in the West have often attributed a mythic status to the title Roshi” reads the Wikipedia article , and continues  “with harmful consequences.”

It is exactly this pretentious link to an imagined “mythic status” and “Japanese Zen tradition” coming along with the usage of “Roshi”, which simply makes it all a big hoax when stripping it off the Japanese monastic context.

I am not aware of anyone providing the title “Roshi” with a new and fresh meaning in the West (except maybe my former Zen teacher, who jokingly used to transcribe “Roshi” with the Japanese Characters 浪師, taking the first syllable from the word “Ronin” (浪人), which means a “Masterless Samurai”).

Not a single one of those Western “Roshi SoandSo” has the qualification to lead a Monks’ training hall in Japan, without any exception. And none of them re-defined his or her usage of the term “Roshi” in a new and genuine Western way.