Occasionally I enjoy watching Jidaigeki, Japanese period dramas with a few brave Samurai saving many good ones (usually the poor and hard working) against certain bad ones (typically wealthy and completely irresponsible and ignorant leaders or bandits) by incredible skill and acts of bravery, often while ignoring their superiors’ orders. I feel less guilty watching such nonsense after I recently read the late Ueashiba Morihei, founder of Aikido, also liked Jidaigeki … though I must admit this sounds a bit like Picasso loved painting by numbers.

A few weeks ago the man who saved Tokyo died from esophageal cancer: the engineer Yoshida Masao, who was leading with a handful others the fight against the Fukushima nuclear disaster. His decision to pump seawater for cooling into the run-away reactors most likely stopped the cores from exploding and prevented Tokyo from becoming a deserted no-man’s land … well against the orders of the TEPCO management, who threatened to penalize Yoshida, because they feared the sea-water might corrode the expensive equipment.

How would Yoshida feel about the ongoing disaster with high amounts of radioactive water leaking from the storage tanks due to most careless negligance, if he was still alive? Building water-proof tanks is not rocket-science, but it costs some money. Is it surprising re-used tanks might leak after re-assembling? Let alone the groundwater issue, which two and a half years after the disaster the Japanese government tries to fix with a $500 project (which is roughly 1/3 of TEPCO’s profit in the year before the earthquake). “These actions indicate that you don’t know what you are doing, you do not have a plan and that you are not doing all you can to protect the environment and the people” TEPCO’s external expert Dale Klein, the former head of the US Nuclear Regulatory Commission concluded.

I wonder if, in case Japan early enough decides to invest sufficient money to really resolve the Fukushima radiation catastrophe, future Jidaigeki will tell stories of a brave engineer who saved Tokyo against ruthless managers interested in nothing but their assets.

By the way, “The Sword that Saved Edo” is really not worth watching … 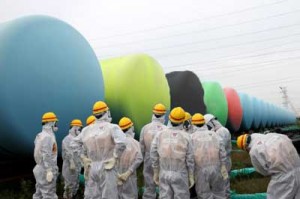 P.S.: while editing this post, Tokyo won the bid for the 2020 Olympics … so maybe the whole situation is now, in spite of all scientific evidence, quite opposite? Tsunekazu Takeda, president of the Japanese Olympic Committee said, that “not one person in Tokyo has been affected by this issue, Tokyo and Fukushima are almost 250 kilometers apart. We are quite remote from Fukushima” and in the words of Prime Minister Abe “It has never done and will never do any damage to Tokyo. There are no health-related problems until now, and nor will there be in the future.”
–
P.P.S.: … just in case one hopes spreading of radioactive material is a local problem, unfortunately it is not: “Tons of cesium-tainted wood chips found near Japan’s biggest lake”. This lake is far from Fukushima, but close to Kyoto.