In Singapore I visited the Buddha Tooth Relic Temple and Museum. It is a new and very impressive Chinese-style red-golden-shiny building, which houses a temple, a museum, a museum-shop, a roof-garden with an enormous prayer wheel (they say the “world’s largest”), thousands of Buddha statues of any colour, size and origin.

I saw the priests and many many devotees chanting Sutras for more than an hour, you could go anywhere even during the ceremonies, and all admission free. On the top floor there is a golden chamber with a golden shrine containing Buddhas tooth relic, also open to the public.

In the Museum, the life of the historic Buddha and spreading of Buddhism is explained and illustrated with many statues from all over the world. The second half of the exhibition deals with the future Buddha Maitreya, which appears to be an essential believe for the community operating this temple. 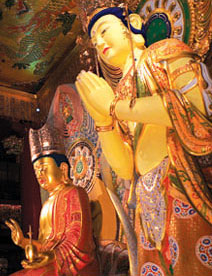 Having a more practical hands-on and not-so-religious approach towards Buddhism, I usually don’t do much more than filling the little bowls of my kitchen and Zendo Buddhas, and occasionally I bow and light incense, considering the long long line of ancestors transmitting Buddhism to our part of the world and our generation. I guess, that’s really the horizon of my understanding of Buddhism …

So I was curious to learn, how the monks living at such an elaborate and educated place would express their Buddhist believes with their bodies’ actions.  It was a bit astonishing to see, that none of them bowed to the big golden Buddha, when entering the 100 dragons hall before the ceremony started. They just came in and sat down on their chairs, like my engineering students at the university do, before I start my lecture.