In our Western culture Chinese/Japanese characters are often appreciated as meaningless symbols. Most of us simply value or imitate their graphical expression as an abstract art. I remember seeing Robert Motherwell‘s “Fronier #3”, obviously inspired by Nantenbo‘s “Katsu”, hanging side by side in an exhibition about Zen an the western art many years ago.

Sometimes the characters appear upside down, mirror-inverse or in a nonsense or embarrassing context at awkward places (bed-sheets shouting “sit” and tattoos maybe amongst the most spooky I have seen).

While teaching Hitsuzendo (Zen calligraphy with brush and ink), I sometimes worry about what the Chinese/Japanese characters tell someone who knows nothing about the language. When I started studying calligraphy two decades ago, luckily I could already read some basic Japanese. Shape, expression and the underlying layers of meaning in the context of Zen, martial arts and Asian philosophy formed a much inspiring unit for me from the very beginning. Each new character, each new word or phrase was a discovery in meaning and writing.

Therefore I believe that a “vision only” approach is a pity. Japanese calligraphy can develop an impressive, inspiring, maybe shocking unit of graphical impact and meaning when both is perceived simultaneously as an entity.

After returning from a one week stay at a rural Zen temple outside Kameoka last spring, I was walking around a busy shopping area in Kyoto. The contrast between intense Zen-practise in the peaceful nature and the buzzing sound-scape and visual impressions of the city was inspiring and confusing at the same time. After a longer period of Zazen, eyes, ears and all senses are more perceptive and sensitive than usual.

Turning around a corner near Teramachi, suddenly I saw a huge calligraphy suspended above my head reading 心 (KOKORO/heart): 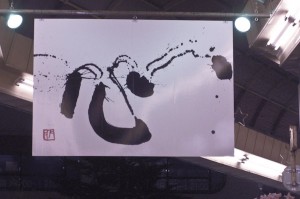 Seeing this dynamic “heart” while reading “heart” in that special situation and environment, I felt my own heart deeply moved. Intense periods of Zazen are called Sesshin 攝心, which can be translated as meeting or touching your heart (notice the second character in “Sesshin” is KOKORO). My heart was suddenly touched by this 心 in a busy shopping mall …

For more than half a year every now and then I thought back about that encounter, until yesterday accidentally I came across the artist’s webpage. I was pleased to see that artistic skill and beauty meet with social engagement … though, not surprised. It was already visible in that one character 心.