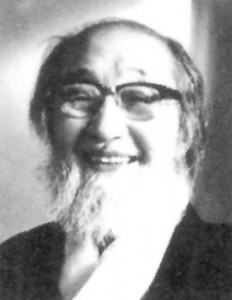 The half-baked attempts of transplanting the outmoded Chinese/Japanese concept of a “Zen-Master” into our modern 21st century Western society can be a never ending source of entertainment. Occasionally I come across web-pages of the one or other “Zen-Master”, providing the most hilarious narration of how his or her “Dharma Transmission” occurred (*), and it might be beyond imagination what really had happened (or not) on such occasion.

Currently I am reading the highly recommended book “Critical Sermons of the Zen Tradition: Hisamatsu’s Talks on Linji“ by Shin’ichi Hisamatsu. Though a bit old fashioned in language here and there, the ideas of this Buddhist scholar, philosopher and tea ceremony master come to us fresh and revolutionary, like a whirlwind blowing out the dust from all corners of a sleepy Zen Dojo.

Let me quote what Hisamatsu wrote on “Dharma Transmission”:

Because the Dharma isn’t apart from the Self, it can’t be obtained from the outside.
[ …]
If our way of obtaining the Dharma leads us to value certification our paper, it will have less worth than toilet paper. True certification occurs only when we realize that the Dharma goes beyond attainment, that we are the True Self. But we tend to get caught up in things, forgetting that the Dharma isn’t something we receive from others. Ask yourself: who certifies whom? The Self does it to the Self. There is no other type of certification. Nevertheless, certification tends to get off the track and become something fixed apart from us. The transmission of the Dharma becomes a mere form, which prevents the Dharma from being transmitted in the true sense. Contemporary Zen people need to think seriously about this.

– Chapter 14, The Meaning of the Founder’s Coming from the West

The Dharma is independent of all sutras, of all words.
[ …]
To treasure these words after Buddha’s death and say that they are his central teaching is to exhibit ignorance of the basic fact that the Dharma is independent of words. The Dharma is living in the present. New expressions and teachings may – and indeed must – emerge from it one after another.
[ …]
One who truly lives in the Dharma does not become entangled in words from Sakyamuni’s “golden mouth”.

This text is more than 50 years old, slightly elder than I am. Yet reading these words makes me feel much younger! Let’s quickly forget them, so new expressions and teachings may emerge from it one after another.

P.S. (7.3.): Many thanks to Rev. Taka Kawakami (the deputy head priest at Shunkoin Temple) for reminding me that Shin’ichi Hisamatsu lived at Shunkoin Temple in the 1930’s. The webpage of Shunkoin explains that “Shunkoin was one of the most important places in Japanese Buddhist philosophy in the early 20th century. D. T. Suzuki and Hōseki S. Hisamatsu, who are two of the most famous Japanese Zen Buddhist philosophers, discussed the future of Japanese Buddhism at this temple. Especially, Hōseki S. Hisamatsu lived in the guest house of Shunkoin and wrote several his books. There are azaleas planted by D.T. Suzuki in the front garden of Shunkoin.”

One more reason to be grateful that (now almost four years ago) our Dojo became Shunkoin Temple’s official association in Germany!

(*) “Dharma Transmission” = “Zen Master” = “Teaching License” is a common misunderstanding in Western Zen. For example, within the Japanese Soto-system a dharma transmisson “[ …] provides access to only a relatively low grade. It is listed as a requirement for the very lowest ecclesiastical status, that of an instructor third class (santo kyoshi). Thus, in present day Soto Zen, dharma transmission constitutes a preliminary step, after which one’s real development begins. The relatively low status of dharma transmission means that in and of itself it does not qualify one to accept students or to train disciples.” quoted after: William M. Bodiford, Dharma Transmission in Theory and Practice, in: Steven Heine and Dale S. Wright (eds.), Zen Ritual Studies of Zen Buddhist Theory in Practice, Oxford University Press, p. 276 (2008).