Let me share some strange experiences I made during the first couple of years just after I started regular Zazen practise:

After ten minutes, the wall in front of me became liquid and kind of transparent. It was fascinating, a bit like sitting in front of a waterfall. But then I was slowly sucked into the wall, and panicked: in case the wall solidifies again, I’d be enclosed by the stones! The vision was so strong that I jumped up from my pillow, shivering from head to legs…

Another time, I was obsessed by the idea that one of my flat-mates stole a book from my room. My concerns became so dominant, that eventually I interrupted my Zazen and went to the bookshelf to have a look. The book was standing there, and I felt very very silly … 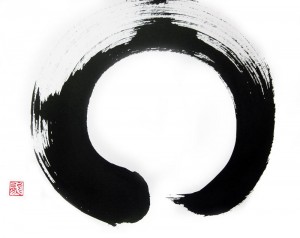 During a several days Sesshin I suddenly saw an Enso (a Zen-circle) floating in front of me each time we did Zazen. I could blow it up or shrink it, change its size and colour … it was amazingly beautiful, and the vision returned the whole week through, whenever I wanted.

What is the meaning of such visions? Are they good or bad? Did I, after all, become mad?

These visions are not of any importance! After the initial beginner’s stadium, when fighting against hurting legs and stiff shoulders is slowly getting less severe and your concentration is getting better, your brain produces any kind of visions. In the Zen tradition they are called Makyo (魔境), which can be translated as deamons’ visions. And by no means they indicate you are becoming mental!

What to do with such visions?

Ignore them! Let them come and go, and focus on your Zazen posture, your breathing. With the years, Makyo will completely go away. And better don’t ask your teacher, if this or that vision you just had during Zazen indicates a pre-mature experience of Enlightenment … it does not!