Yesterday, the Japanese team won the women’s Football World Cup. Against whom did they win?

In case you have a chance to visit the Engakuji Temple in Kita-Kamakura, let me suggest to leave the beaten track and turn left before passing through the big wooden Sanmon-gate uphill. You will find a small sub-temple, which functions as a Kyudo Dojo (a place to practice Japanese archery).

The answer is given by the head-master of the Kyudo Dojo, the old priest Suhara Koun (I was so lucky to meet and talk to several times during my visits the past decade). In the show-case right hand side after entering the Dojo grounds, he hung a newspaper article about the 1960 and 1964 Olympic marathon winner Abebe Bikila. 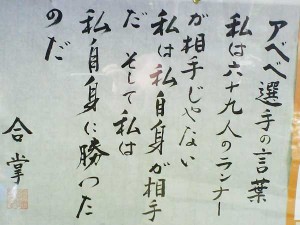 Suhara Koun quoted in his own calligraphy from that article:

Words of the athlete Abebe: The other 69 runners were not my competitors, I myself was my competitor. Therefore, I won against myself.

Congratulations to the Japanese soccer team, for not giving up in the face of disaster and invincible opponents, and winning the World Cup competition against themselves!