The afternoon of the second day we went down from our temple, the Jotokuji (常徳寺), to the Roshi’s Zendo at Tokoji Temple (東光寺) for doing Zazen. It felt kind of normal and kind of strange to walk through the village like in a formal monk’s procession, the three of us one after the other, our hands folded as during kinhin. But K-san joyfully greeted all people we met on our way, and their friendly reply gave me much comfort not performing too much as a „henna gaijin“ (weird foreigner). 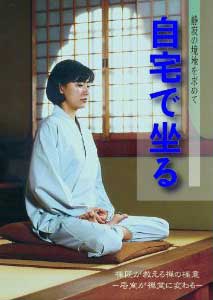 The Zendo of Tokoji is very nice, you can see it in a recently issued Japanese Zazen tutorial-DVD called “自宅で坐る”, made by the Roshi (one can buy at any Rinzai-Zen temple in Japan).

The three of us did a round of Zazen together with the Roshi, and then he gave us some explanation why in Zen it is so important to practise and not just to do theory: body and heart must act together, unified, and not be separated. For us, often the head and thinking is the most important thing, he said. But only when body and heart act together in the same direction, we are free. This “free” he illustrated with very vivid actions imitating a sword fighter defending against attackers from all sides …

Then we briefly talked about my former teacher, that he and the Roshi were both studying under Omori Sogen. The Roshi remembered meeting my former teacher in a bookshop in Kyoto, when we both visited the city in May 2009.

I can see lots of similarities between the Roshi and my former teacher, almost to the extend that I got the feeling to know the Roshi much longer than just a few days. Is it maybe Omori Sogen’s spirit, which I met through both of them?