Eventually I continue with instructions for self-study of Hitsuzendo (筆禅道), a Zen-exercise with brush and ink I teach and occasionally wrote about in my blog. Before continuing to exercise with the below sample, you might want to read what I suggest for practising Hitsuzendo here and here.

Today’s character is one of my favourite, pronounced DO (in the Japanese interpretation of the original Chinese “Dao”) or michi, in kun-yomi, the Japanese way of reading it. It refers to the “way of practice” as in ShoDO (the way of calligraphy), AikiDO, KenDO, IaiDo or KyuDO (some martial arts), KaDO (the way of formal flower arrangement, also known as ikebana) or ChaDO (the way of tea, also called cha no yu).

The character is written in one breath, one stroke from the top left to the bottom right. The lines and numbers 1-2-3 indicate the direction, no start or stop. 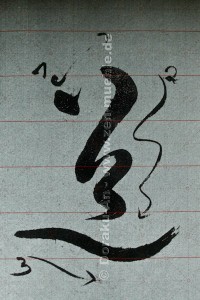 Some points to consider:

Today’s example is written in gyosho or cursive style, which does not much resemble it’s (more complicated) standard form.

I will post more samples later … for hands-on instructions please consider my seminars in June and November at Benediktushof Holzkirchen (near Wuerzburg/Germany).